SOME of the game’s finest Aboriginal and Torres Strait Islanders have played for the Melbourne Football Club.

Entering 2019, 26 Indigenous players have played a VFL/AFL or AFLW match for Melbourne.

Les Bamblett (1983, 11 matches, 12 goals)
Convinced to join Melbourne after a chance meeting with Ron Barassi, Bamblett joined the club from Lemnos and won the 1982 Morrish Medal – the Brownlow Medal equivalent – in the under 19s. He made his debut in 1983, booting two goals. It proved to be his only year with the Demons, after he crossed to the Bulldogs for the 1984 season, where he played 37 games and kicked 59 goals, including 24 matches and 51 goals in 1985 – the year the Dogs made the preliminary final. Injuries interrupted his career. His nephews are Andrew Lovett and Chris Egan, who played in the AFL.

Dom Barry (2014, 5 matches, 0 goals)
Originally originally listed by GWS via its Northern Territory zone, Barry was traded to Melbourne in 2012. Barry didn’t play a match with Melbourne in his first season, but he toured Ireland with the Indigenous All Stars, as part of the International Rules Series at the end of 2013. He played five matches for Melbourne in 2014 and although he signed on with the club until the end of 2016, he decided to return to the Territory at the end of the 2014 season, citing family reasons. He reentered the AFL via the 2017 NAB AFL Draft, being selected by Port Adelaide for the 2018 season. As a 14-year-old, Barry moved to Victoria via an Indigenous tennis scholarship.

Jamie Bennell (2009-12, 57 matches, 23 goals)
Bennell played 35 games in his first two seasons, developing as a rebounding defender. He later spent time up forward and in 2010 kicked four goals in Melbourne’s first home and away match in Darwin – a one-point win over Port Adelaide. After more than 50 games with the club, Bennell was delisted at the end of 2012 and later joined West Coast Eagles, where he added 30 games. 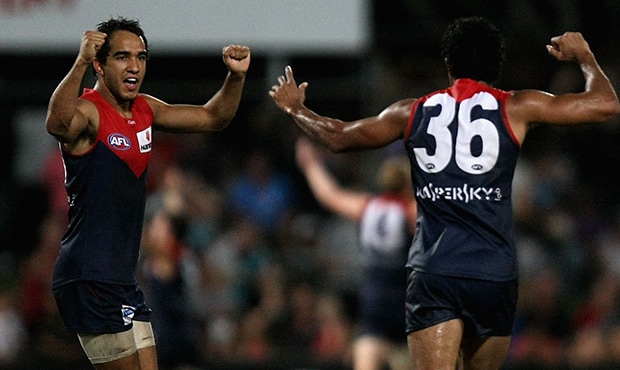 Sean Charles (1992-97, 47 matches, 60 goals)
Charles had a dazzling debut with Melbourne, booting five goals against North Melbourne in round 10, 1992. He was just 17 years and five days old. Injuries played a big part in Charles’ career, but he managed to kick 10 goals in consecutive weeks, including five against Carlton in the 1994 qualifying final. He played with Melbourne until the end of 1997, before joining Carlton. Charles suffered a serious leg break in his first game with the Blues in 1998 – he only appearance for the club – and he later joined St Kilda, playing eight matches in 2000.

Scott Chisholm (1999-00, 18 matches, 8 goals)
A member of Fremantle’s inaugural AFL side in 1995, Chisholm became a fine player with the Dockers, where he notched up 63 matches until the end of 1998. He was noted for his dashing style of play out of defence. Chisholm played 17 matches in his first season with Melbourne – he topped the club’s Brownlow Medal count with six votes – but played just the opening round in 2000, suffering a corked thigh.

Aaron Davey (2004-13, 178 matches, 174 goals)
Davey came to Melbourne after impressing in the VFL for Port Melbourne, where he won the Fothergill-Round Medal for the best young player. He made his debut in the first round of 2004 and immediately had an impact, with his livewire style of play, and his defensive pressure. He played 19 games in his first season – finishing runner-up in the NAB AFL Rising Star – and finished third in the best and fairest in 2005. Davey represented Australia in the International Rules Series in 2005-06 – he also kicked 37 majors for the Demons in 2006 – and in 2009, he won Melbourne’s best and fairest award. Davey became a member of Melbourne’s leadership group in 2010. In 2013, he again the Indigenous All Stars team against Ireland in the International Rules Series. Injuries played their part in the latter stage of his career, but he became one of Melbourne’s best – and most popular – players of the 2000s. He is the brother of Alwyn, who played for Essendon is cousins with 1993 Brownlow Medal winner, Gavin Wanganeen. Aaron Davey celebrates a goal against the Lions

Jeff Farmer (1995-01, 118 matches, 259 goals)
‘The Wizard’ was an electrifying player for Melbourne. Originally tied to Fremantle’s inaugural list, he was swapped to Melbourne and made his debut in round one, 1995. He booted a goal with his first AFL kick and quickly became a favourite with the red and blue faithful. In 1998, he provided two great highlights – a brilliant, running goal against Hawthorn and a screamer against Richmond. Farmer spent seven seasons with the Demons, kicking 76 goals in Melbourne’s 2000 Grand Final year. In the same year, he bagged a nine-goal haul against Collingwood – all in the second half – and booted eight goals in the preliminary final against North Melbourne. In the Grand Final, he kicked an equal team-best three goals. Farmer was named All-Australian in 2000. At the end of the 2001 season, he returned to his native Western Australia and played for Fremantle from 2002-08, playing 131 games and kicking 224 goals. 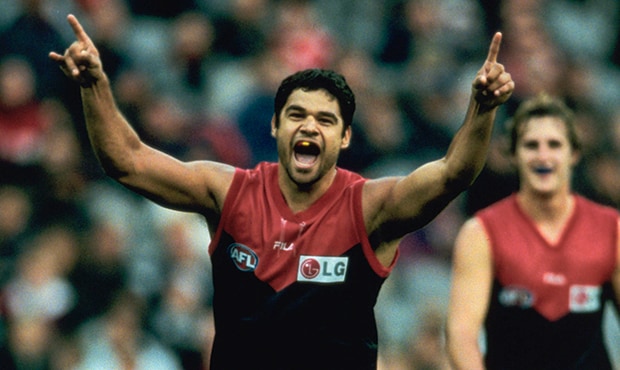 Farmer gets the crowd going in 2000 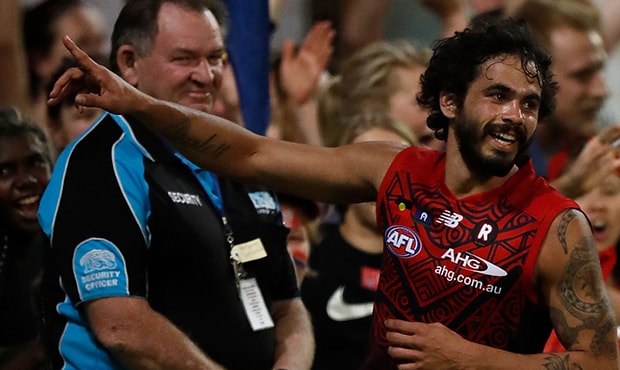 Eddie Jackson (1947-52, 84 games, 10 goals)
The second Indigenous person to play for Melbourne – and the only Indigenous Melbourne premiership player. Club great Jack Mueller helped lure Jackson over to the club, after he initially was set to join Richmond. He was named Melbourne’s best first year player in 1947, and was a member of the 1948 drawn Grand Final against Essendon, and played in Melbourne’s premiership win the following week. His 17 matches in 1951 was his best return in a season. His son Steven later played for Melbourne’s under 19s in 1981. Neville Jetta (2009-current, 148 matches, 24 goals) *
Made his AFL debut in round one, 2009, playing 15 matches in his first season, before injuries interrupted the early part of his career. Played 43 games in his first five seasons and was delisted at the end of the 2013 season. Redrafted as a rookie in the lead-up to the 2014 season and it was from that season that he transformed his game and went to another level, under then coach Paul Roos. He reinvented himself and soon became one of the best small defenders in the game. In 2017, he was named in the All-Australian squad and represented Australia in the International Rules Series. Now a highly-regarded player at Melbourne and among the competition. 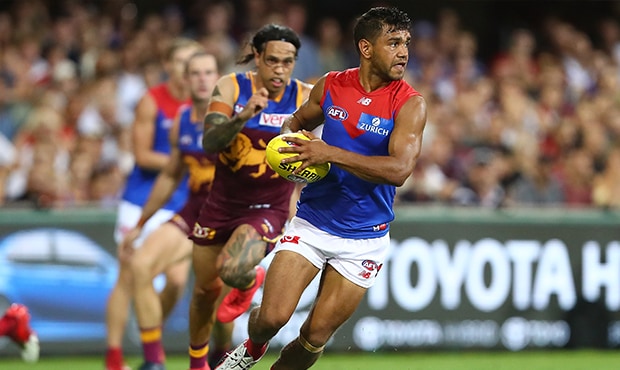 Jetta against the Lions

Liam Jurrah (2009-11, 35 matches, 81 goals)
Hailing from Yuendumu in Central Australia, Jurrah made his AFL debut in 2009 and quickly became a favourite among the Melbourne faithful and the football community. He gained a NAB AFL Rising Star nomination in 2009 and kicked three bags of four goals in his first nine games that year. A shoulder injury ruined the start to the 2010 season, but he managed 21 goals in the last eight games of the season, which included the mark of the year in round 21. His best effort was five goals, which he achieved twice in 2010 and 2011. He led Melbourne’s goalkicking in 2011 with 40 goals from 18 games. Jurrah managed one more match in 2012, but injuries and personal issues forced him to finish with the club at the end of that season. But have provided plenty of excitement during his time in the AFL.

Jay Kennedy Harris (2014-2019, 39 matches, 12 goals)
JKH was drafted by the Demons at pick No. 40 in the 2013 National Draft, going on to play 39 matches across six seasons at the club. Playing as a small forward and midfielder, he burst out of the blocks in his first pre-season game in 2014, kicking three final quarter goals to help Melbourne secure an unlikely victory against the Tigers. He was also selected to play for the Indigenous All-Stars in a 2015 pre-season fixture against West Coast. Injury saw Kennedy Harris miss large portions of his career and he was delisted by the club at the end of the 2019 season.

Andy Lovell (1988-95, 121 matches, 146 goals)
Affectionately known as ‘Chopper’ – he was a star woodchopper as a teenager and his father was a champion axeman – Lovell made his debut for Melbourne as a 17-year-old, playing 22 games in his first year, including the 1988 Grand Final. Injuries interrupted his second season – he played one game in 1989 – while he added 12 matches in 1990 and five in 1991, including both finals. He kicked four majors in Melbourne’s elimination final win over Essendon in 1991, when teammate Allen Jakovich booted eight goals. In his last four seasons at Melbourne – from 1992-95 – he became an integral part of the side, playing 81 matches. In round 21, 1993, he kicked a career-best eight goals against Richmond. He also had an outstanding finals series in 1994 – one of Melbourne’s best sides since its most recent premiership. At the end of the 1995 season, he crossed to West Coast, where he was swapped for Craig Turley. Lovell played 43 games for the Eagles from 1996-98. He was later an assistant coach at Geelong, coach of Melbourne’s former VFL aligned side, Sandringham, and has been with Gold Coast Suns since they entered the AFL in 2011.

Steven May (2019-present, 8 matches, 1 goal)*
Crossed to Melbourne in a high profile trade in 2018 after 123 games at the Gold Coast Suns. The big bodied defender co-captained the Suns alongside Tom Lynch in the 2017 and 2018 seasons. His debut season at Melbourne didn't go to plan however, managing just eight games as he battled groin and hamstring injuries.

Shannon Motlop (2005-06, 10 matches, 5 goals)
Motlop arrived at Melbourne following the tragic passing of Troy Broadbridge in the Indian Ocean Tsunami. A member of the Kangaroos’ premiership side in 1999 – he played 54 matches with the Roos from 1999-2003 – Motlop joined Melbourne from North Adelaide, where he played in 2004. Although he battled hamstring injuries in his first year with Melbourne, he played in the club’s elimination final. After notching up seven matches for the Demons in 2005, he added three more in 2006. During his time at Melbourne, he played in consecutive Sandringham premierships in 2005-06 – the club’s former VFL affiliate. His brother Daniel played for Port Adelaide and North Melbourne, while his younger brother Steven played with the Cats before crossing to the Power for the 2018 season. Byron Pickett in his playing days with the Dees

George Simmonds (1924, 4 matches, 4 goals)
The first Indigenous person to play with Melbourne, Simmonds made his debut in round 13, 1924 against Carlton. He kicked two goals in his second game.

Isaac Weetra (2008, 2 matches, 0 goals)
Made his AFL debut in the opening round of the 2008 season against Hawthorn and played the following week against Western Bulldogs – both massive losses by 104 and 95 points respectively. It was his only season at the Demons.

Matthew Whelan (2000-09, 150 matches, 15 goals)
A much-loved player among the Melbourne faithful throughout the 2000s, Whelan played 16 games in his first season and was on track to play in the club’s 2000 finals series and Grand Final, but suffered a neck injury in round 19. Although injuries interrupted his second season, and the latter part of his career, he played 63 games from 2002-04 and was an integral part of Melbourne’s team for much of the 2000s. He played in Melbourne’s three consecutive finals series from 2004-06. Noted for his fierce tackling, courage and ability to rebound from defence. Now works at the club as its Indigenous project officer. 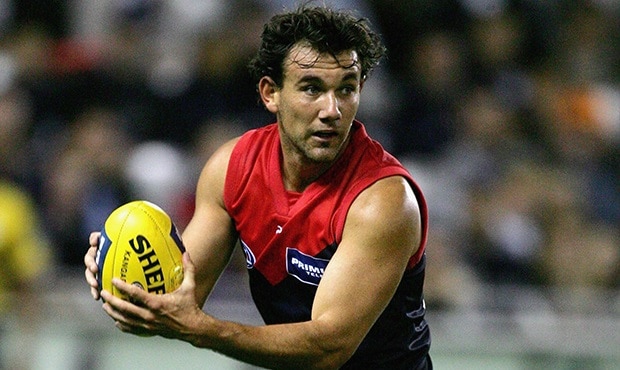 Austin Wonaeamirri (2008, 2010-11, 31 matches, 37 goals)
Made an immediate impact in his first season, playing 18 of his 31 matches in 2008, Wonaeamirri kicked three goals in his fourth match against the Brisbane Lions and four majors the next round against Fremantle. He played a crucial role in Melbourne’s remarkable comeback win against the Dockers in round seven, 2008. He didn’t play a game in 2009, after hamstring and knee injuries ruined his season, while he added 13 games in 2010-11. ‘Aussie’, as he’s affectionately known, was the first Melbourne player to come from the Tiwi Islands.

Aliesha Newman (2017-present, 18 matches, 11 goals)
An electrifying forward, Newman was the first Indigenous women to play for Melbourne in the AFLW competition in their inaugural match against Brisbane at Casey Fields in 2017. With a background in athletics and soccer, Newman joined Melbourne as a free agent in October 2016. She was the recipient of the AFLW Goal of the Year award in 2018 for her brilliant, running goal scored against Adelaide at Casey Fields. 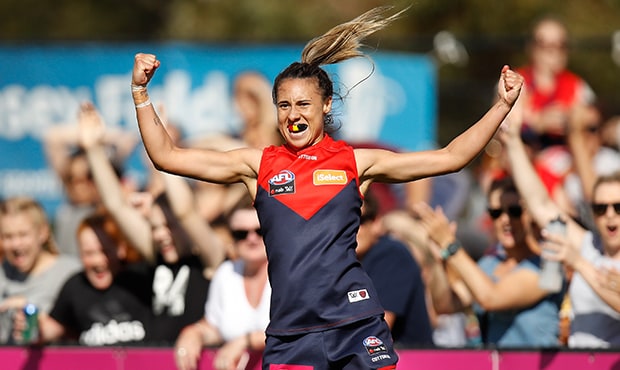